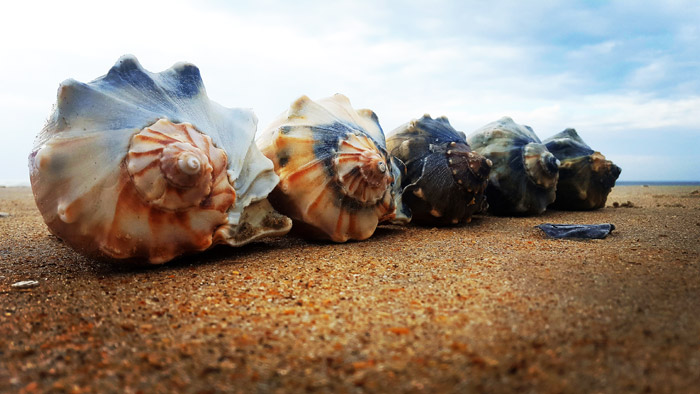 Beachcombing on the Outer Banks, especially during the winter and early spring, can prove to be a challenging adventure due to the harsh weather conditions that frequent the area. Our sandbar is known for its many shipwrecks due to high seas, strong currents and blustery nor’easters.

In the winter months, the Labrador Current dips down and pushes its arctic waters close to Hatteras Island, colliding with the Gulf Stream. This collision can stir up the ocean floor and cause huge amounts of debris to wash ashore, from shell piles to shipwrecks.

Many shells favor cold water over tropical waters, and one kind in particular that many beachcombers enjoy collecting is the whelk.

Whelk shells are often mistakenly called conch shells, but there are many differences in the two shell types. For starters, aside from the whelks preferring cold water and conchs preferring tropical waters, whelks are carnivores – and at times, cannibals – whereas conchs are herbivores.

Known as the “bullies of the sea,” whelks attack each other, as well as any other smaller animal they find. Conchs are not aggressive, for they eat algae or kelp and so they don’t have to kill for survival.

The whelk has a “foot” on its opening which is how the shell can move around the floor, dragging its large whirling shell behind itself. This foot is also used to help protect the shell from attacks, as well as aid it in its own attacks. The conch does not have this foot, and instead, it leaps around the floor by contracting its muscle. Whelks are also hermaphrodites and sexually reproduce on their own. They lay a string of spiraling eggs cases (more on whelk casings here) that they implant into the sand. On Hatteras Island, beachcombers can often find these cream-colored spirals washed ashore after storms.

Each case can contain 25-plus tiny shells, and each strand can have over 40 cases – that’s more than 1,000 baby shells! These tiny shells burst out of the cases and swim on their own through the sea, in hopes of landing among a seashell sandbar where they can grow and develop. Comparatively, conchs are either male or female, and reproduce by having intercourse.

There are more than 50 kinds of whelks around the world, and there are six varieties of whelks that can be found along the coast of Hatteras and Ocracoke islands – knobbed, Kiener, lightning, channeled, pear and fig.

The channeled whelk is rare but not uncommon, whereas the pear and fig whelks are very rare in our area, as these are much more fragile than the other three kinds of whelks on the Outer Banks.

The lightning whelk is my personal favorite out of the six types mentioned above because it is one of the only shells known in the world that opens to the left. Almost every shell known, when you hold it in your hand with the point – or the apex – pointing upwards, the opening is on the right side, except for the lightning whelk.

Whelks have been around for over 60 million years and humans have been collecting and using them throughout the ages. On Hatteras Island, the legend goes that pirates would put the extra-large whelk shells on their fists, using the lightning one on their left, and have boxing matches using the whelks as gloves. There are other stories of sailors using the egg cases as a bath loofah, and evidence of Native Americans using them as gardening tools.

Nowadays, beachcombers collect them for their aesthetic value and not for their function. Some collect them for crafting, like making air plant pots. Since these shells get so large, our state record is over 12 inches, their size combined with the huge amount of eggs each one can lay means they are highly populated in the Atlantic Ocean.

They range in size from 0.5 inches to over 12 inches, and because of their toughness, broken pieces of these whelks can be found on almost every beach on the Outer Banks. Many of these broken whelk parts are gathered by shelling enthusiasts and artists. Although shells are no longer used in our culture like they once were, they are still valued among collectors and beachcombers.

The next time you are out beachcombing on the Outer Banks or on the North Atlantic coastline and you come across a huge spiral shell, you have most likely have found a whelk. Now that you know the difference between a whelk and a conch, fewer people will confuse the two species, so you’re “whelkome.”

This story is provided courtesy of the Island Free Press, a digital newspaper covering Hatteras and Ocracoke islands.

North Carolina native Kristin Hissong, a University of North Carolina Charlotte graduate, has been an Outer Banks resident of 15 years, and is a dedicated, beachcomber, spending more than 20,000 hours walking the Outer Banks and shorelines around the Eastern Seaboard. For the past five years, she has been beachcombing on Hatteras and Ocracoke islands every day, collecting both treasures and trash on her routine expeditions. From typewriters to coffee makers, fishing rods to recliners, if you name it, there’s a good chance she has seen it washed up, and has hauled it to back to her collection, or to the closest dumpster.